TEHRAN (Tasnim) - The Sheikh Lotfollah Mosque is the most unusual Iranian religious structure and undoubtedly, the most splendid of all. The mosque was built during the reign of Shah Abbas I and named after a famous Shiite preacher of those days.

A native of Lebanon, Sheikh Lotfollah came to Iran to seek the patronage of Shah Abbas the Great who, as a part of the Safavid policy of fostering the Shiite faith, not only encouraged the Sheikh to take up residence in Iran, but also put him in charge of the Royal Mosque and a theological school. In Shah Abbas, the venerated Sheikh, in addition to a patron, found also a son-in-law.

The mosque's construction started in 1602. The portal was completed first to be integrated into majestic Naqsh-e jahan Square. The remainder of the structure was finished in 1619. Throughout the Safavid reign, the Sheikh Lotfollah Mosque served as a private chapel for the shah and his harem. For a long time, it was rumored that there existed a secret passage leading from the harem to the mosque. Archaeological excavations, however, have proved it to be pure legend.

The layout of the mosque has a very non-Iranian character: it has neither a four-eivan courtyard, nor a minaret. Their absence can be explained by the fact that the mosque was not ereated as a place of public worship, but was intended exclusively for the shah and his wives. Contrary to usual practice, the entrance 1 is elevated, with a flight of several steps leading to the gate. 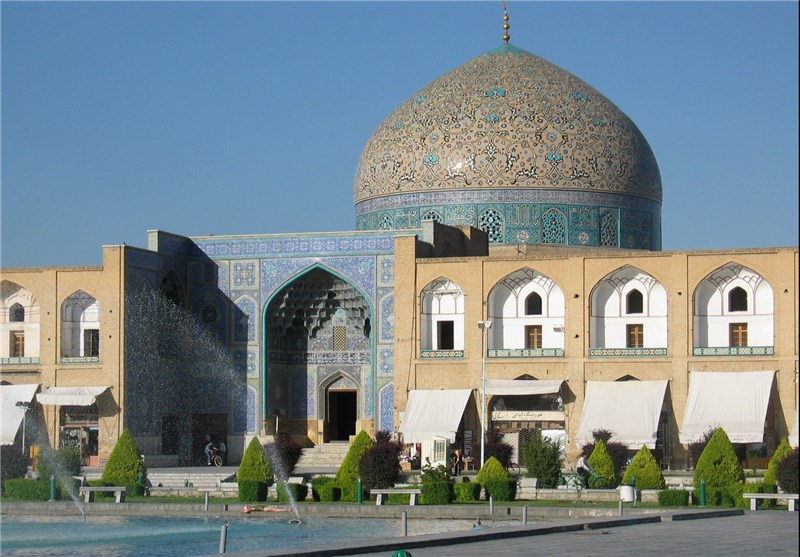 The facade of the Sheikh Lotfollah Mosque is quite asymmetrical with respect to the dome. This asymmetry confers upon the masses and volumes of the edifice an interesting liveliness and adds greatly to the charm of the building's silhouette. The mosque is famous for the moqarnas effect of its portal. The groined vault is completely encrusted with faience mosaic, but the rest of the building's exterior is overlaid with polychrome tiles in splendid blue and yellow colors. This is quite a contrast to the Royal Mosque, where sumptuous mosaic is applied on the portal, while polychrome tiles cover the remaining surfaces.

The building's plan is simple. Behind the entrance portal, a corridor 2, begins. This narrow, dimly-lit passageway with three bends (the first, at 45°, is practically unnoticeable, but is crucial in realigning the mosque from its cardinal orientation on the square toward Mecca) leads to a prayer hall 3,. The tortuous course of this corridor is not due merely to the necessity of orienting the building in right direction. Its aim is, first and foremost, to create a striking contrast between the oppressive, gloomy narrowness of the approach and the spaciousness of the prayer hall at its end. 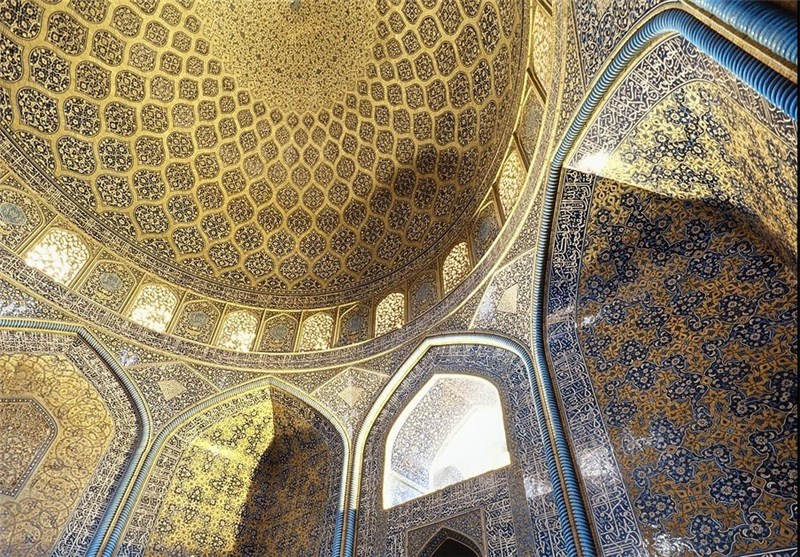 Visitors cannot fail to be staggered by the vast room topped with the most flawless Iranian dome. This dome is extraordinary both in form and color. Externally, its dominant color is not the usual glittering blue, but an unglazed cream or pink, according to the time of day. Serene at any time, it is at its most magical in the rays of the afternoon sun and around sunset. The blue shades of classic Safavid art appear only on the drum and right at the top.

Inside, the tile mosaic forms a golden sun medallion at the ape) of the dome. Though blue color predominates in the tile work, there is an unusual amount of yellow, and, as in the exterior, there is the flickering contrast between alternating glazed and unglazed tiles.

Both exterior and interior surfaces of the dome bear fine inscriptions in Tholth script made of white mosaic against an azure floral background. These, as well as a portal inscription, are the works of Alireza Abbasi, the famous calligrapher of Shah Abbas's court. The other inscriptions belong to Baqer Banna (the Builder) who was undeservedly overshadowed by the glory of the master he had copied. Of these, the most remarkable is an Arabic verse on the eastern and western sides that lists the fourteen infallible people, according to Shiite beliefs. It is attributed to Sheikh Bahai.

The Sheikh Lotfollah is a truly unworldly mosque that heightens the visitor's spirituality rather than distracts him from it. Indeed, it is impossible to leave this building unaffected. 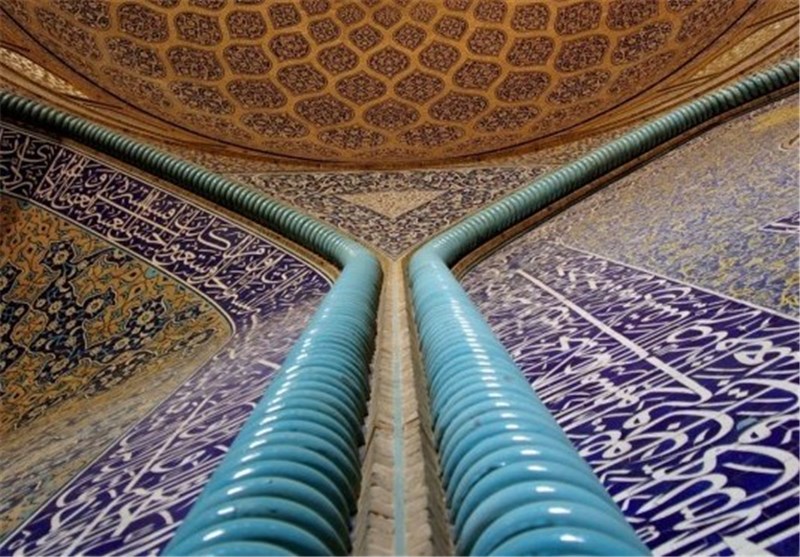